We measured a projected obliquity (spin-orbit alignment) of λ = 5° ± 15°, indicating it is well-aligned.

We found H-alpha to be smoothly varying throughout our observations, and while we see a slight transit-like shape, we attribute the signal to stellar activity.

We need more transmission spectra of V1298 Tau c to say anything definitive about the planet's atmosphere.

V1298 Tau is a 23 Myr K0-1.5 star hosting 4 known transiting exoplanets discovered with NASA's K2 mission (David et al. 2020). The innermost planet, V1298 Tau c, has a radius 5.59 x REarth on an 8.24 day period (transits are highlighted in the original light curve to the left). Based on the current X-Ray luminosity of the host star, this planet is predicted to evolve into the radius gap after 5 Gyr (Poppenhaeger et al. 2020; see orange star and predicted evolved radii below). If we can detect an extended atmosphere and measure the atmospheric mass-loss rate, we can further constrain the final radius of V1298 Tau c and better understand the current Kepler exoplanet population (contours below). 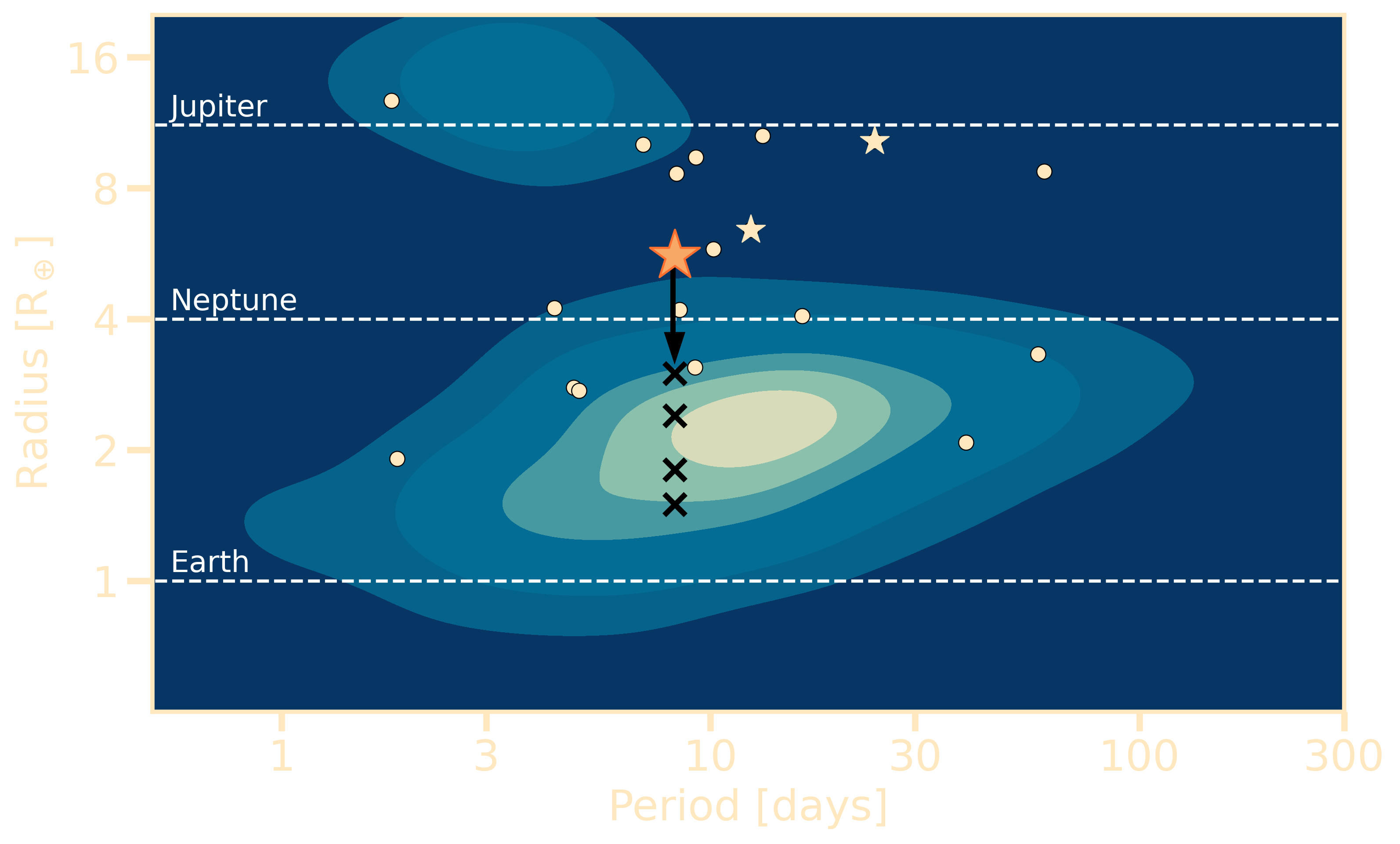 But, as you can see in the light curve, V1298 Tau is very active. There are large spot modulations, indicating the surface is heavily spotted. This is not unsurprising for young stars (Gully-Santiago et al. 2017, Feinstein et al. 2020). Stellar surface inhomogeneities have been shown to contaminate planetary transmission spectra, specifically in H-alpha (Rackham et al. 2018). So in order to detect an atmosphere in H-alpha, we would need to fully understand the inhomogeneity coverage of the host star's surface.

Another interesting property of the system would be the spin-orbit alignment (obliquity), which is the angle between the orbital plane and the stellar spin axis. As the system is only 23 Myr, the migration mechanism for how V1298 Tau c got to be at an orbital separation of AU. While several obliquities have been measured for older systems, only a few have been conducted for systems < 100 Myr (e.g. AU Mic b Addison et al. 2020, Hirano et al. 2020, Martioli et al. 2020, Palle et al. 2020; DS Tuc Ab Montet et al. 2020, Zhou et al. 2020, Benatti et al. 2021).

We were awarded time on Gemini-North using the GRACES spectrograph to observe a full transit of V1298 Tau c, with two scientific questions in mind:

We used Doppler tomography, which relies on detecting the perturbations in rotationally broadened stellar line profiles, to measure the spin-orbit alignment (projected obliquity). As the planet crosses between us at the star, it creates a deviation in the line profile that, when compared to the out-of-transit observations, create a streak in the fractional deviation that can be used to measure the project obliquity.

We measure a projected obliquity, λ = 5° ± 15°, indicating V1298 Tau c is well-aligned. The obliquity could only be measured using the Ca II Infrared triplet (IRT; right) and is not seen in any other lines in our wavelength range. The deviations are only seen in the chromospherically driven core of each line.

Variations in the Ca II IRT have been seen for other close-in planets and are hypothesized to be star-planet interactions, which is a result of the planet and star's magnetic fields interacting (Shkolnik et al. 2008; Cauley et al. 2019). The Ca II IRT is an ionized triplet and therefore could be a tracer of the magnetic activity. However, with only 1 transit, it is hard to determine if this is actually the case. 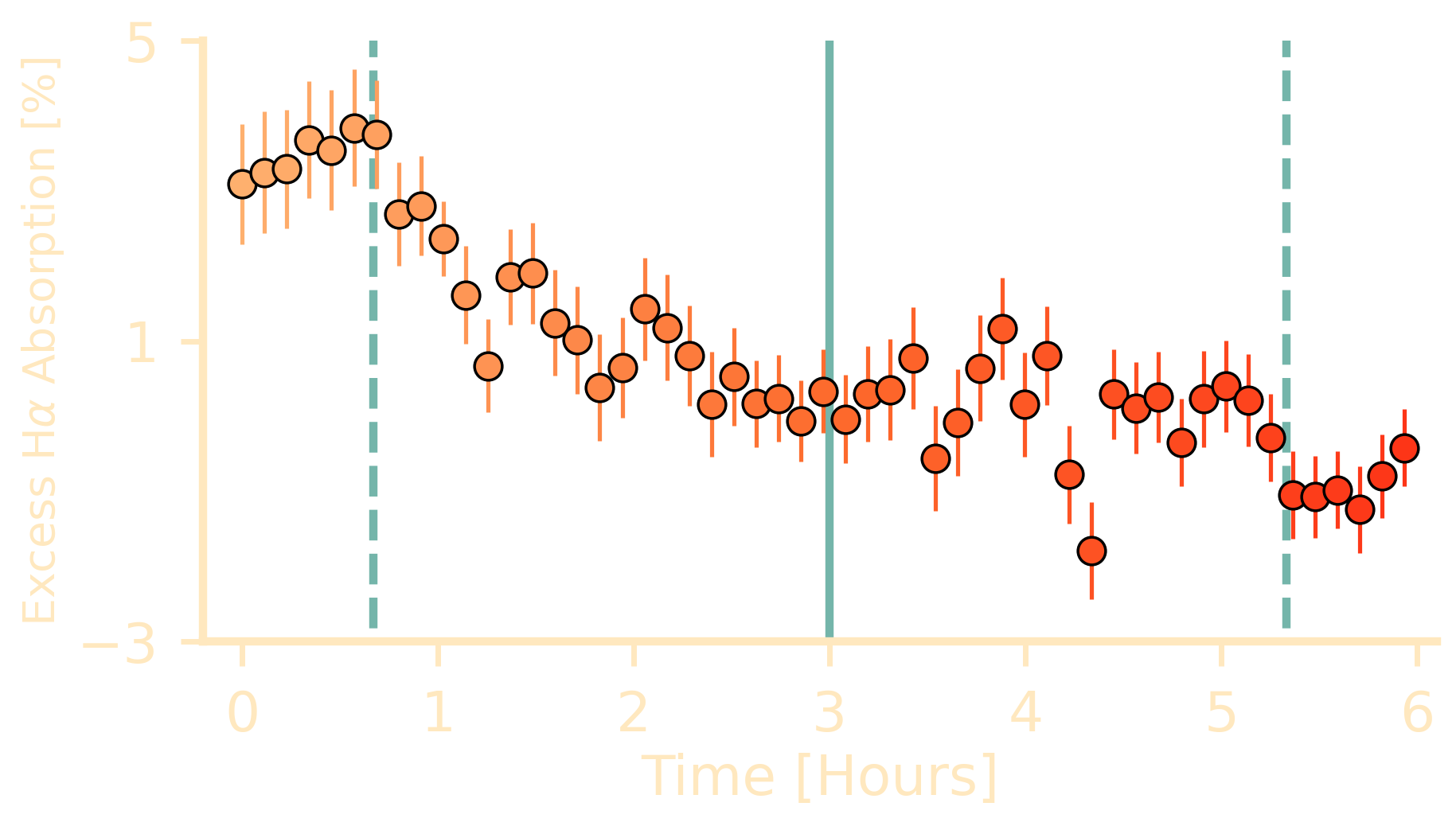 We found the H-alpha excess absorption from the beginning to the end of our observing run to smoothly decrease. There may be slight 'bumps' at transit ingress and egress (vertical dashed lines), that could be correlated with the transit, with a long term activity trend. If we fit the out-of-transit data with a line to remove the long term trend, we find a transit with a depth corresponding to 1.28 RJupiter.

But! The trend in decreasing H-alpha absorption throughout the night can also be explained with a toy model of a starspot with a surrounding facular region. To build this model, we used a combination of starry (Luger et al. 2019) and spectrum (Gray & Corbally, 1994). We generated spectra for a 5000K star (V1298 Tau; orange), with spot and facular regions of 4500K (red regions) and 5500K (yellow regions), respectively.

We demonstrate this with one potential configuration. The model created also captures the 4-6% photometric variability seen in the K2 light curve. This toy model (orange) exhibits a similar trend to what is seen in our observations (gray). We also see that the H-alpha variation seen over one night for V1298 Tau (~5%) is consistent for what is seen for other young stars. With only 1 transit, it's hard to disentangle the stellar activity from the planet. Here, we favor stellar activity as the explanation for our observations. 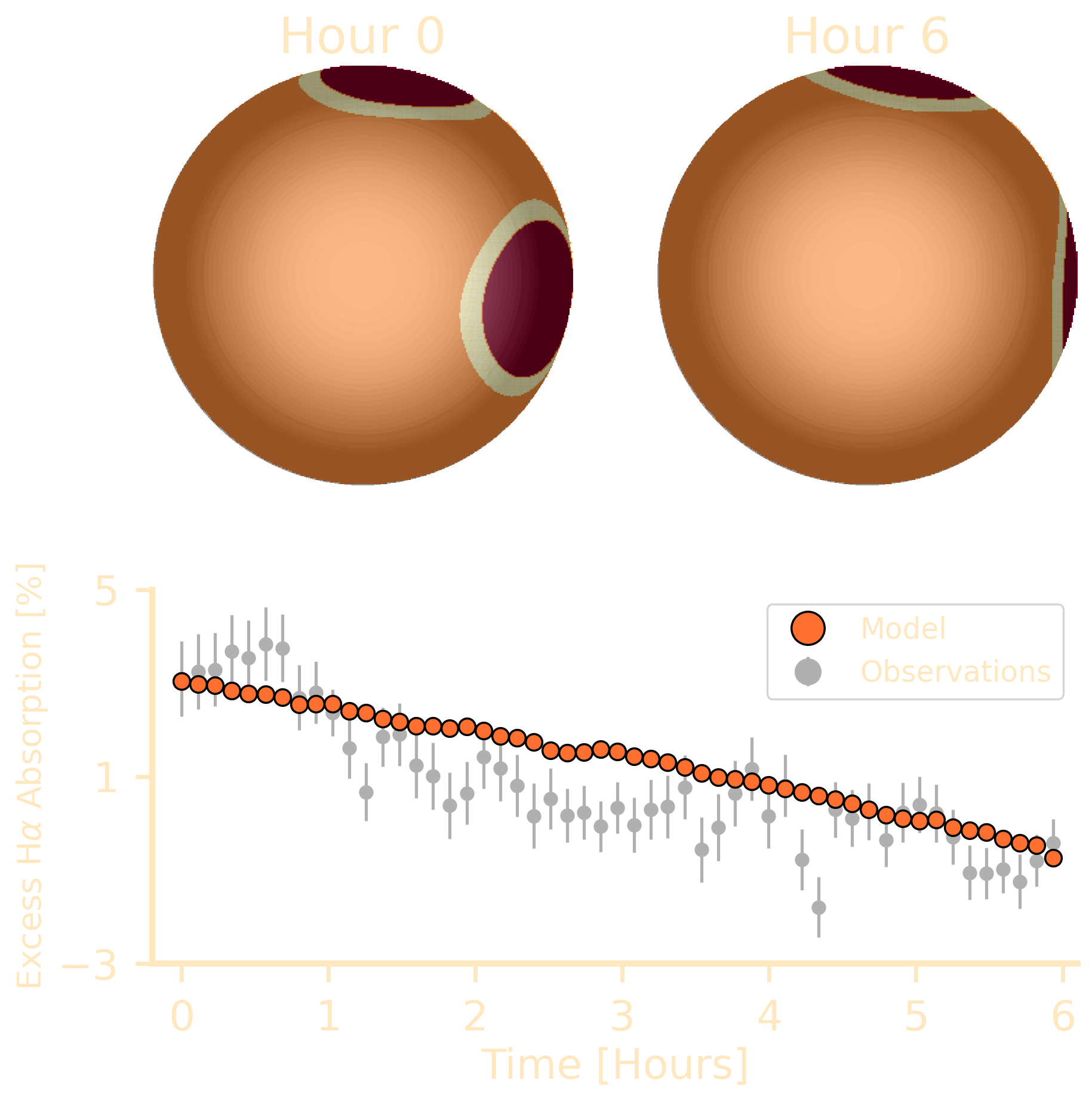 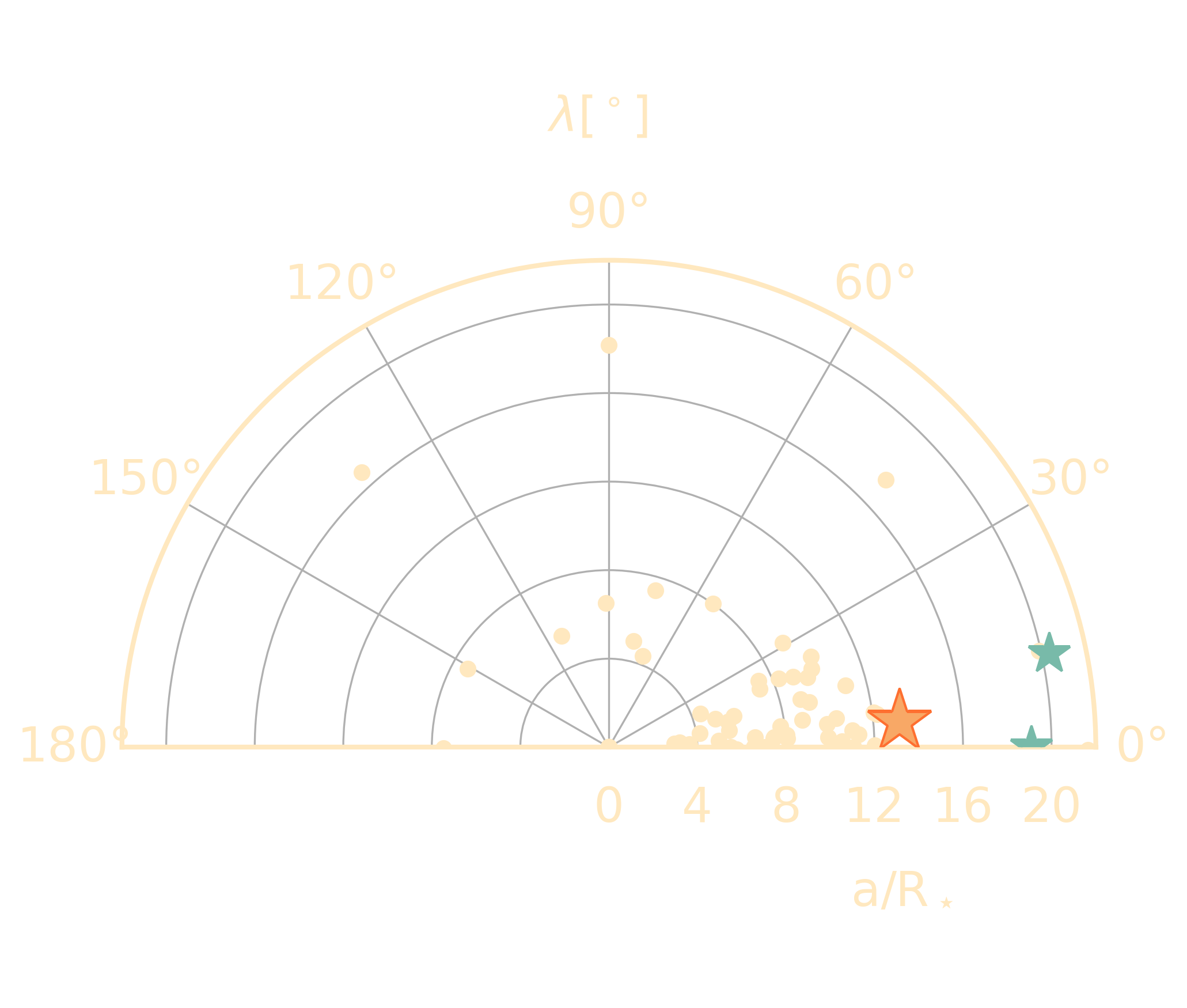 We were able to measure the projected obliquity for V1298 Tau c (λ = 5° ± 15°; orange star). V1298 Tau c adds to a growing list of young planets with low obliquities, including V1298 Tau b (Johnson et al. in prep), indicating these planets undergo smooth migration shortly after they formed. Multi-planet systems tend towards being well-aligned at all ages (Albrecht et al. 2013) and we have demonstrated that the V1298 Tau system is no exception.

And there are still many questions about why the H-alpha is behaving the way we observed and if we will be able to detect the extended atmosphere of V1298 Tau c. Long term H-alpha monitoring of V1298 Tau would prove useful, particularly with simultaneous photometric monitoring to correlate H-alpha behavior with starspot modulation. This could be readily done with TESS. The metastable He I triplet at 1083.3 nm may be an easier line to observe to characterize the atmosphere.